SERVE works with the Good Shepherds in four locations in Thailand. These are Chiang Rai, Phuket, Nong Khai and Pattaya.

The Good Shepherd’s work in each location is focused on reducing vulnerability andempowering marginalised communities, especially women and children. Each of these areas has unique development challenges which can briefly be described as follows:

The remote mountain areas of Chiang Rai, northern Thailand, are home to tribes who immigrated to the area from China, Vietnam, Laos and Myanmar. The tribes have mostly preserved their traditional way of life and retain their own language, customs and dress. The vast majority of these tribes are very poor and survive by subsistence farming. They do not have the same rights or access to services as Thai people and live on the margins of society. It is estimated that less than one third of the 3,000 tribal villages have little access to any educational facilities, especially above sixth grade. Only 30% of Thailand’s estimated 500,000 minority tribal people have recognition and are entitled to Thai citizenship. The Good Shepherds work with these tribes in the areas of education, healthcare, HIV/AIDS, income generation and human rights;

In Phuket, southern Thailand, the Good Shepherds work predominantly with economic migrants and victims of human trafficking from Myanmar. Informal estimates put the number of Burmese migrants in Phuket at 300,000. These migrants live in temporary housing which have now turned into migrant camps and effectively ghettoise these people. The living conditions are very basic and contribute to violence, exploitation of children and health problems. Migrants have little or no access to healthcare and education. The Good Shepherds are working in the areas of women and child rehabilitation, health outreach, education, skills training and community networking and reconciliation;

Nong Khai is a rural area in northern Thailand, bordering Laos. Due to the lack of education and employment opportunities in the area, young women have traditionally been forced to leave the villages by their families to find work in large cities like Bangkok and Pattaya. These women carry the burden of having to solely provide for their families and help them meet their basic needs. These women are vulnerable to exploitation and often find themselves forced into the sex tourism industry. In Nong Khai, the Good Shepherds run the Regina Self Help Centre which works with women to empower them and to prevent them having to leave their families and communities. This is achieved through skills training and employment projects in the areas of sewing, handcrafts and catering; and

Pattaya is a city in southern Thailand, located about 160km south of Bangkok. The city is infamous for its sex tourism industry. Women from the poorer areas of northern Thailand come to the city in search of work and the majority end up working in the sex industry. These women are vulnerable, exploited and at risk of pregnancy, HIV/AIDS and other sexually transmitted infections. In Pattaya, the Good Shepherds run the Fountain of Life Centre which is a centre for marginalised women exploited by the sex tourism industry. The Centre promotes the empowerment of these women and provides skills training, language training, counselling and health support.

Active and Completed Projects in Thailand

The Good Shepherd Sisters are committed to helping vulnerable women, especially women who are forced to work in the sex tourist industry in Thailand. SERVE & ElectricAid support 4 Good Shepherd run projects which focus on helping women secure dignified employment and prevent women from being trafficked into the sex tourist industry. SERVE also support a programme providing support to Burmese migrants in Phuket. Approximately 3,500 women and children each year benefit directly from the Good Shepherds work. 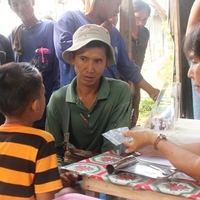 This project supported the Good Shepherds HIV/AIDS Awareness and Support Programme (ASP) in the hill-tribe communities near Chiang Rai, northern Thailand. It proposed to hold 22 educational seminars and workshops either at the Good Shepherd Centre at Phan or in the remote villages. By December 2011, the following was achieved:

Donate to Projects in Thailand