In early March 2019, Cyclone Idai made landfall close to the city of Beira in central Mozambique. This Cyclone was one of the most powerful tropical cyclones on record and caused widespread devastation across Mozambique and neighbouring countries. Over 1,500 people lost their lives and many thousands more are still missing. Over 1 million people in the region were affected and the impact of the Cyclone are still being felt a year later. Those worst affected were already living in poverty and the Cyclone worsened their livelihood security – over 100,000 are still living in resettlement sites with basic services. The impact on the city of Beira is still visible a year later and little work has been done to repair a broken city. 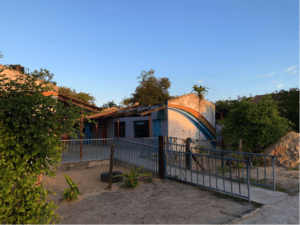 The Cyclone caused significant damage to three buildings on the YA Mozambique Beira campus – the Hostel building, the Catering/Restaurant Department and the Creche. There was further widespread damage on the campus but this was less serious.

In 2009, a volunteer group from St. Brigid’s Parish travelled to Beira with SERVE. They funded and participated in the construction of the creche that would allow the local community to access quality childcare and help young mothers access training programmes to improve their employment and income generation prospects. The creche ran very successfully until the Cyclone hit. It provided excellent care for approximately 50 children, employed local staff and was integrated into the training programme at YA Mozambique by providing a practical training experience to students in the Early Childhood Development course. Unfortunately, the Creche was partly destroyed by Cyclone Idai with the roof completely removed and significant internal damage. 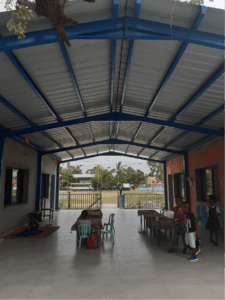 Thanks to the support of St. Brigid’s Parish 10 years after they funded the initial build, work on the rebuild began in July 2019. It was important to complete the work by this stage before the heavy rains started and caused further damage to the exposed parts of the building.

By November, the creche was reopened and was providing its services to the community once again and to young mothers who were completing training programmes at YA Mozambique. The creche continues to play a key role on the YA Mozambique campus and YA staff with children also use the facility. There are now 60 children attending the creche on a daily basis. It is the only creche facility in this community and is greatly valued by parents. 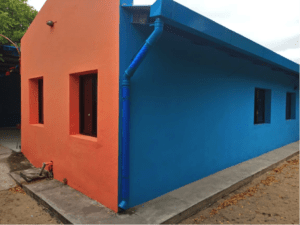 The impact of the Cyclone for YA Mozambique was significant – they responded admirably in housing and feeding local families who lost everything. The Training Centre was reopened within two weeks and courses were reorganised to make the best use of facilities that were still available. Throughout all this, with electricity, fuel, food and water shortages, they developed the initial plans to rebuild the Centre.

Unfortunately the Centre closed due to the Covid-19 pandemic. However, the innovative Young Africa are in the process of creating safe learning environments for their students to hopefully allow classes resume shortly.

SERVE and Young Africa would like to thank everyone at St. Brigid’s Parish for their generosity and powerful expression of solidarity with the people of Beira.