Today (12th August 2015)  is International Youth Day. Over 90% of the world’s youth live in developing countries. Globally,  youth unemployment is three times higher than that of adults. This is a problem in both developing and developed countries: The potential of a whole generation risks being wasted with skills losses that would diminish long-term economic prospects while stoking social tensions. SERVE and our partners are working to ensure that young people have access to education and skills training, to empower them to live independently.

In his blog, Chris O’ Donoghue (SERVE Belfast) speaks about youth and the power they can have to make a difference.

By Chris O’Donoghue
We live in a young world: children and young people (those aged 24 and younger) make up over 40% of the world population. The number of young people aged between 15 and 24 accounts for 18% of global population. We also live in an incredibly unequal world where just 84 of the world’s richest people have a combined wealth equivalent to that of 3.5 billion of the worlds economically poorest people. Young people are interested in Global issues and we in the youth sector have a responsibility to journey with them as we engage in these issues. How can we discuss human rights in Belfast without talking about the thousands of people drowning this year alone trying to enter Europe? 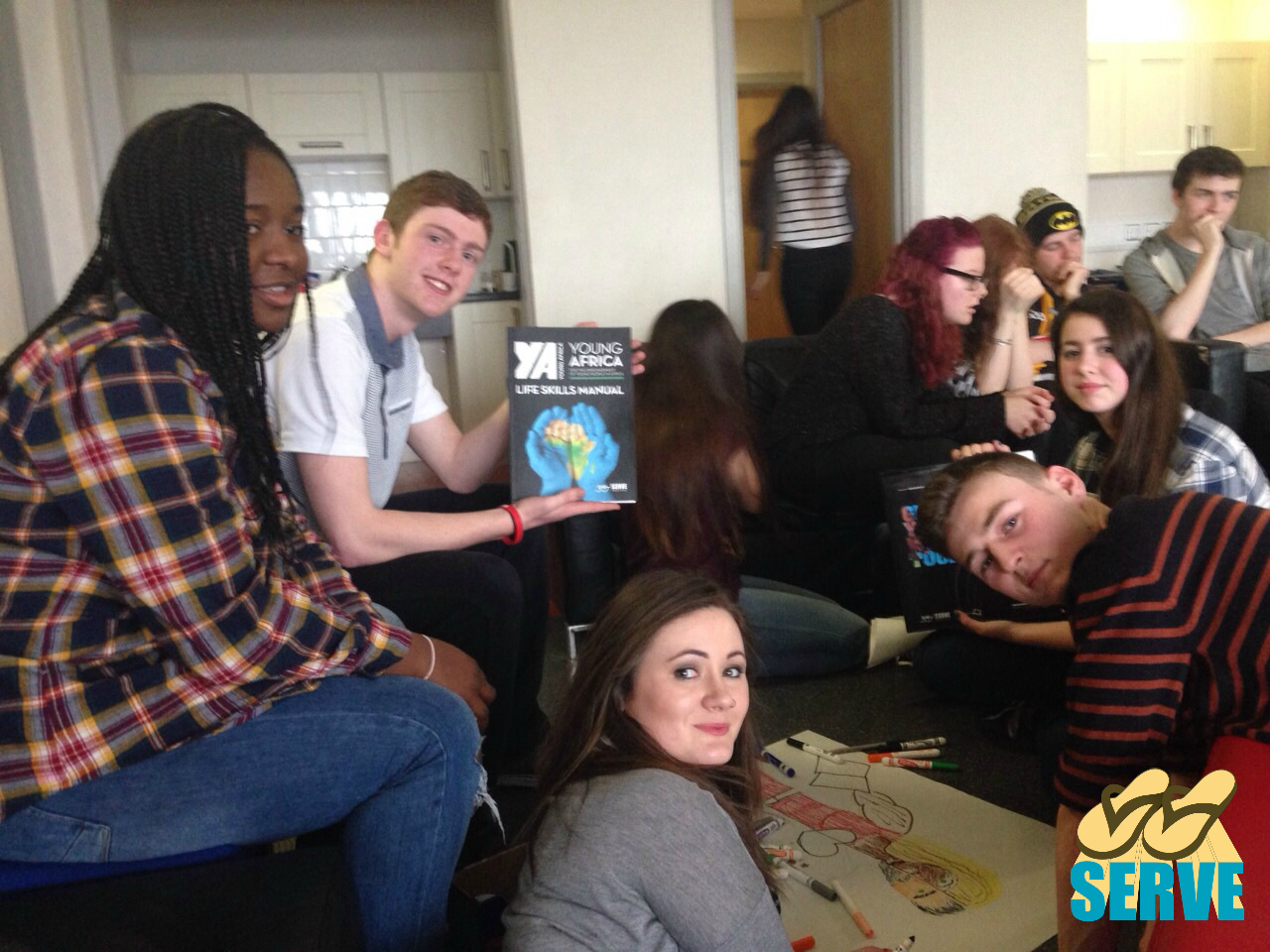 How can we engage with young people in meaningful peace and reconciliation work in Derry while wars are raging in Syria, Ukraine, Iraq, Afghanistan and Nigeria? How can we talk about interdependence when we have people being killed in their place of work in Bangladesh making garments sold in Enniskillen? We live in a young unequal world and it is one world. The term Global Education to me simply means we have to think local but act Global. Young people are engaged in so much charity work in, clubs, churches and schools and this is a great start for them to see how they can be of service to others in their own community as well as further afield but it can’t stop there. We need to move from a place of charity to solidarity. These are changed times and we need to change with them – we now know that our lifestyle and actions on this side of the world directly affect those in another part of the world. Interdependence is not a one way street. We rely on people every day of the week for the food we eat, clothes we wear, fuel we consume, minerals we use in our gadgets and the list goes on. The one thing all these things we rely on have in common is, in a lot of cases people and the planet are being exploited in the process. Young people today have inherited a very fragile world that is at tipping point and this generation will be the ones to decide which way the scales will go. Nelson Mandela is quoted as saying:

“Overcoming poverty is not a task of charity it is an act of justice. Like Slavery and Apartheid, poverty is not natural. It is man-made and it can be overcome and eradicated by the actions of human beings. Sometimes it falls on a generation to be great. YOU can be that great generation”.

We in SERVE firmly believe that this generation of young people are up to the challenge and have the skills, strength and resolve to make it happen. It is our job to support them in becoming a great generation and let us be inspired by them to be the change. SERVE is a development and volunteering organisation based in Ireland which supports Youth Development projects in Zimbabwe, Zambia, Mozambique and South Africa.

This article was featured in the Curriculum Development News (Youth Work N.I.) magazine. Original article can be found on page 20 here.

Fiona Agnew travelled to South Africa on a SERVE School Immersion Programme last year. Fiona has since attended the Irish Aid, Youth Delegate Programme event, launched by Secretary General Ban Ki Moon in Dublin. Below she writes of her experience overseas and her thoughts on the Sustainable Development Goals.

Sitting at the Irish Aid event, launching the Irish Youth Delegate programme in May 2015, Secretary General Ban Ki-Moon spoke to us ‘youth’. He urged us to become global citizens, to have compassion for people across the world, to be agents of change starting now, not just in the future. His advice was heavily reminiscent of my experience in South Africa with Serve, where, in collaboration with a dynamic South African youth group (together named the Born Frees) we too agreed to be global citizens. These two opportunities had been presented to me over the course of the last year or so, beginning with an assembly in school offering the chance to spend 10 days on an immersion project around Cape Town and ending many months later, with an invitation to hear Ban Ki-Moon speak on the sustainable development goals for 2030. 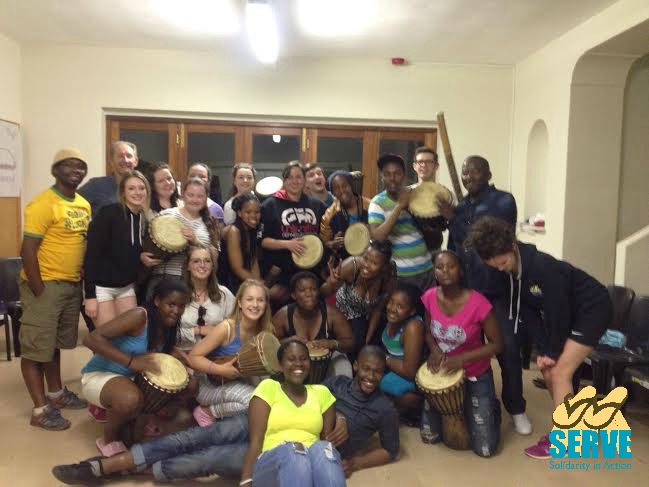 My experience with Serve began in earnest, after all the fundraising and excitement, during the whirlwind residential with our Lagan College team and the young South Africans where we talked, danced, ate and began conversations about identity, history, the future and conflict across the globe. One valuable thing that we all shared was a perspective from a new generation as we, the Northern Irish, and the South Africans were the first born free of conflict in our countries. While it’s difficult to know what this means for us, with the responsibility and expectations that comes with being the “future generation”, it was outlined perfectly in Ban Ki-Moon’s talks on sustainable development goals and youth peoples contribution to them on the 26th May 2015. He began, with much appreciation, by welcoming us in Irish and went on to remark on the energy and warmth he felt from the audience. If there was one thing he wanted his legacy to be, he expressed, it would be to “walk for and walk with young people” to continue on the progress already made in the work regarding sustainable development and climate change agreements made at the UN. A number of major events in 2015, including the United Nations conference in New York this September, need to see the voice of the younger generations heard. As the Secretary General remarked “You can’t spell young without UN”. Evanna Lynch and Donncha O’Callaghan were also at the event as UNICEF ambassadors and they answered questions about their experiences travelling across the world and seeing UNICEF’s work in action. A question was posed to Evanna, asking how she thought the issues surrounding the SDG’s could be made known and important to the public. Her answer was simple; “Don’t discount how effective passion is” and she explained that you inspire through stories and emotions. You can’t force people to care but you can show them what it means. This was certainly true from my time in both Goedgedacht Path out of Poverty and the Amy Biehl foundation, visiting after schools centres and seeing how important their work was in harnessing children’s spirit and talent, especially in more rural communities. Experiences like my time in South Africa with Serve make the 17 SDGs for 2030 seem more real, more relevant, more essential to achieve, which is exactly the kind of impact Evanna spoke about.

In particular, Goal 10, to reduce inequality within and among countries, stands out for me as it is so prominent in many countries, especially South Africa, and Goal 4, to ensure inclusive and equitable quality education and promote lifelong learning opportunities for all is hugely important to tackle endless issues. Ban Ki-Moon was confident, as am I, that inequality and injustice are tackled in each of the sustainable development goals. Although it’s a topic that I’ve only recently discovered and I’m far away from fully comprehending the ins and outs, through the Immersion Project with Serve and attending the Irish Aid event with Ban Ki-Moon, I’ve been able to begin to understand what sustainable development means for the future and develop ideas as to what my generations can bring.

This article was featured in the Curriculum Development News (Youth Work N.I.) magazine. Original article can be found on page 21 here. 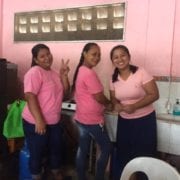 Week 1 of volunteering in South Africa