News/Events
You are here: Home1 / News/Events2 / Uncategorized3 / Workmanship and Community 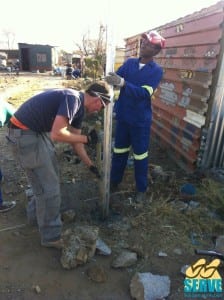 Chris and William installing the fencing around the creche

From working on the site in Dichibidu I noticed it is different from working back home in Ireland. I am working with the guys from the local ‘Step up and Serve’ team and I was surprised at all the work they are able to do by hand. At home we might have a tea break, but not here. From machinery to all hands on deck, I found that communication would be clearer back home then on site here.

We began by clearing the site and then we dug 10 holes for 10 posts, all by hand with shovels. We filled the holes with concrete which filled about 12 inches in order to put up the fence. Unfortunately after we returned the next day we realised that two of the posts had been moved so we then had to dig a deeper hole so they could not be tampered with.

As I am a carpenter, when I am not on site, I have been in the workshop making furniture for the new crèche. It is amazing to come over here and see how they make use of such little material such as tyres and pallets. I can see they are very creative in what they like to make, and they are not afraid to start their own businesses, even though they might have little to start off with. 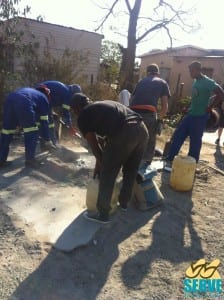 Chris working in partnership with Tsholofelo community in Dichibidu

It is shocking to me also to see the extreme wealth surrounding these poor areas where I am working. Even though these people are very poor, I have seen a lot of positive sides such as them making use of their basic materials in the squatter camps and creativity towards making a living.

I also attended a local South African Mass, I felt a great sense of community and I also felt that as time went on during the mass, the more the sense of community vibe strengthened. Before or after mass, the people would speak to each other about their problems, they use it as a source of comfort, which is also something I would never see at home.

Overall, I am really enjoying my experience here. After being here with SERVE previously, I can safely say I will definitely be back again, hopefully as a leader! 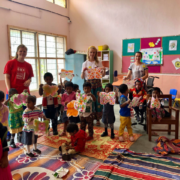